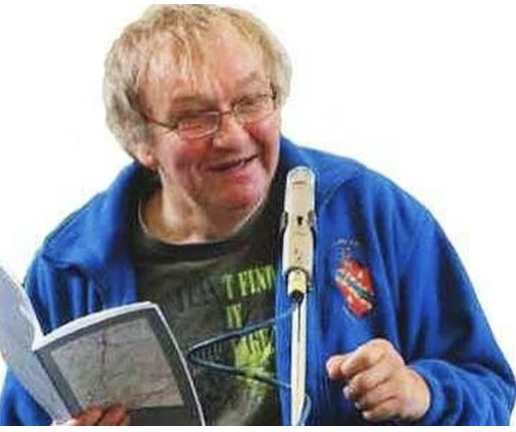 Les Barker, 75, a poet, author and musician of global repute, was found at Park Hall, Oswestry on Sunday morning after collapsing the night before.

He will undoubtedly be remembered as a man who made people laugh with his poetry and his friendship. I saw him on a number of occasions at The National and was thrilled to have him come & perform at Humph Hall back in 2010.  I have the concert on video – see ‘Video of the Week’ below. I also hosted an online session with him called ‘An evening with Les Barker’s Breakfast‘ in January, 2021.

“Though the scruffy, cardigan-wearing idiot was his stage persona, in real life he was a scruffy, cardigan-wearing gentle genius who wrote not only side-splittingly funny poems, but, serious ones, too, bitingly political or searingly beautiful. His stage performances, reading his poems from one or more of his numerous books sold said books, and CDs, in fistfuls after each show.” – Jacey Bedford (his agent)

“Sorry to hear of the death of Les Barker. A very inventive and very funny man. I last saw him perform at Bromyard festival last September. A unique poet with a great deal of creativity and with a list of titles that would be hard to match. Everybody had their avourite poems, mine include ‘news of the iceberg’ and ‘Cosmo, the fairly accurate knife thrower’.” – Alan Gough