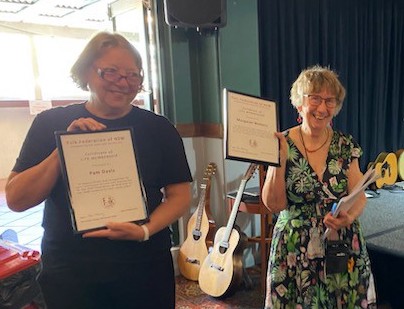 Two retiring members of the Folk Federation of NSW committee, Pam Davis (left) and Margaret Walters (right), were recognised at Sunday’s End of Year Folk Bash for their many years of service and dedication to the Folk Federation and the folk community. Needless to say, while both have stepped down from the committee they were heavily involved in the organisation of the afternoon’s activities. Pam Davis was manning the ticket desk and co-ordinating the afternoon “tea” while Margaret Walters oversaw all aspects of the program from booking the artists and organising the sound to programming the concert.

We applaud these two stalwarts of the NSW folk scene and will miss them both and their contributions at our committee meetings. However, we are pleased to know they won’t be entirely disappearing are happy for us to call on their support as needed.

A big, BIG thank you to Pam Davis and Margaret Walters.