The Sydney Dozen: Curious stories about Sydney’s past 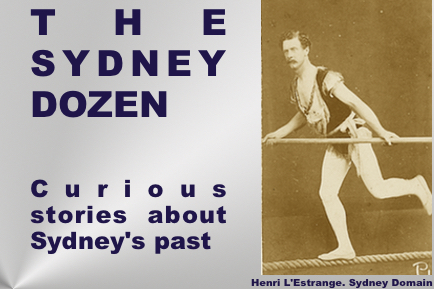 Cultural historian and performer, Warren Fahey, has received a City of Sydney Creative Fellowship to create 12 short video films on curious stories relating Sydney’s social history told through rare archival images, film, paintings, songs and stories. The 12 video films will be around 12-15 minutes and made available on YouTube and social media platforms plus the City of Sydney library site. The Folk Federation of NSW is acting as auspice for the grant and will have its logo on each film. One of the programs will celebrate the Federation’s 50th anniversary. Warren is currently looking for early photographs and home movies of folk music performers, folk festivals, folk clubs, backyard BBQ with music, bands etc especially from 1960 onwards – if you have anything interesting please send scans to Warren Fahey.

The Flash Mob: An overview of Sydney’s ‘high life’ from the Lord Mayor’s Costume Ball in 1844 through to the Trocadero & ‘fancy’ restaurants & nightclubs of the 1950s.

The City on The Harbour: An unusual snapshot of Sydney’s maritime history showing transport, harbour amusements & the working harbour.

Larrikins, Louts & Layabouts: A history of the Sydney larrikins from the 1870s to the 1940s. They were a wild mob with gangs in the Rocks, Paddington, Woolloomooloo & Surry Hills.

Ratbags & Rabble-rousers: The early history of the Sydney Domain including the Sydney Exhibition, its role in WW1 as an enlistment centre for the Cooee Marches, Speaker’s Corner & as an entertainment arena for international acts like tightrope walker, Henri LeStrange (The Australian Blondin), in the 1870s.

Till Death Do Us Part: How Sydney buried its dead from convict times through to the establishment of Rookwood Cemetery in 1867. Rookwood is the largest surviving Victorian necropolis in the Southern Hemisphere.

Kings-Bloody-Cross: A social history of Kings Cross entertainment from the high life to the low life & the very low life.

Lean Times & Mean Times: Sydney in the Great Depression. How we lived & how we pulled up our socks & moved on to the financial booms of the ’60s & ’70s.

A Celestial Harvest: A snapshot of Sydney’s Chinese history including key figures like Mei Quong Tart & Way Key through to the establishment of one of the world’s most successful China Towns.