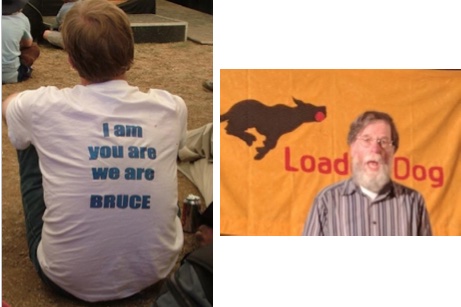 BRUCE WATSON – his performances are joyful and thoroughly engaging, with witty lyrics and energetic presentation. He is a masterful craftsman of songs, be they evocative and heart wrenching, or side-splittingly funny.
Bruce is an icon of the Australian folk scene. Based in Melbourne, he plays regularly at festivals, folk clubs and other venues throughout Australia. He has received a stack of songwriting awards and had his songs covered by performers of the calibre of Eric Bogle, Joe Dolce, Greg Champion, and a host of other Australian and international performers.
He has produced seven albums of original songs, received radio airplay across Australia, and he appears on many compilation albums alongside artists such as Yothu Yindi and Christine Anu.
Eric Bogle has described him as the best songwriter I have seen in a long time. Melbourne folk institution The Boite says, Bruce Watson is a wordsmith, a teller of tales, a spinner of yarns he tells with passion and integrity. An Australian folk hero!  Bruce’s website: www.brucewatsonmusic.com   Videos: www.youtube.com/brucewatsonmusic

Margaret Bradford cannot join us as she has broken her leg, fortunately with all the cycling & walking she does, she has strong bones & will heal faster than I would!

Support from Gerry Myerson, now with added facial hair. If unaccompanied singing were like tightrope-walking without a net, Gerry Myerson would spend most of his days in hospital. Instead, he’s able to offer audiences anything from Child ballads to childish parodies learned in the schoolyard, from traditional songs of the Appalachians to protest songs of the 1960s, from Tom Lehrer to Stan Rogers, and back again.