Feed back from the group was very positive. . ( www.brucewatsonmusic.com )  They were all enthusiastic and several are already collaborating on songs.

We would like to thank Bruce and look forward to working with him again in the future. In response to feedback, we hope that we can hold one over two days at a future date. This will also accommodate those who missed out when this workshop filled up.

Thanks also to Rosie Mac Donald and Penny Rankin-Smith from Fairlight Folk for their support in the planning, promoting and hosting the event. More than half of the participants stayed on for the evening concert which featured Bruce, along with the Dixie Chooks and Westminster.

We are currently planning a variety of workshops which will be held at  various locations and hope to be able to work with other folk clubs where appropriate. 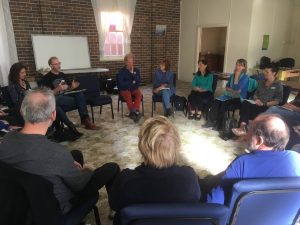 About Max Gregory 2 Articles
I am a multi-Instrumentalist playing banjo, mandolin guitar, slide guitar, blues harp and ukulele I have been performing since the late 1960. I helped start up the NSW University Folk club in about 1967 and performed with a variety of people at everything from bush dances and balls, to folk clubs and political protests. Strawberry Jam started in about 1968 and after years of playing folk clubs went on to play clubs and the occasional television spot. We played anything that we liked from traditional Australian, Irish, British and American to contemporary music. Whistling Goose started in the late 70’s playing jugband music in Folk Clubs, wine bars and pubs up until the mid 80’s In 2005-2015 some of us got back together to form The Blue Goose Band, which played a mix of jugband, blues, jazz standards, folk and contemporary Australian songs.