In Dec ’19 I sat in Bob’s Bar at Woodford Folk Festival to hear a new trio. Three women with diverse musical backgrounds, multi-instrumentalists and no strangers to the folk scene; Kate Burke, Melanie Horsnell, and Robyn Martin. Together they are The New Graces and, COVID aside their journey in 2020 to the present would make you burst with pride.

As the gigs dried up in 2020 The New Graces focused their attention on the release of their debut album Seasons. With that came accolade after accolade culminating in four Golden Guitar Award nominations at the Tamworth Country Music Festival: “Traditional Album of the Year”;  “Heritage Song of the Year”; and, for the Graces “New Talent of the Year”; and, “Duo or Band of the Year”.

Follow the links on the thumbnails to find out more. 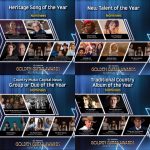 While the trio may not have taken away an award this time around it has certainly made its mark, putting “folk” in the spotlight and garnering new fans for the genre. Four Golden Guitar nominations is no mean feat and, that aside, they were also invited to present the Alt Country Award with Michael Carpenter and, sang backing harmonies on national TV with Fanny Lumsden.

The New Graces may be “new” to country music audiences but we know them and their music has all the hallmarks of folk: songs with cohesive threads and narratives; music that connects with and engages its audience and is close to its source.