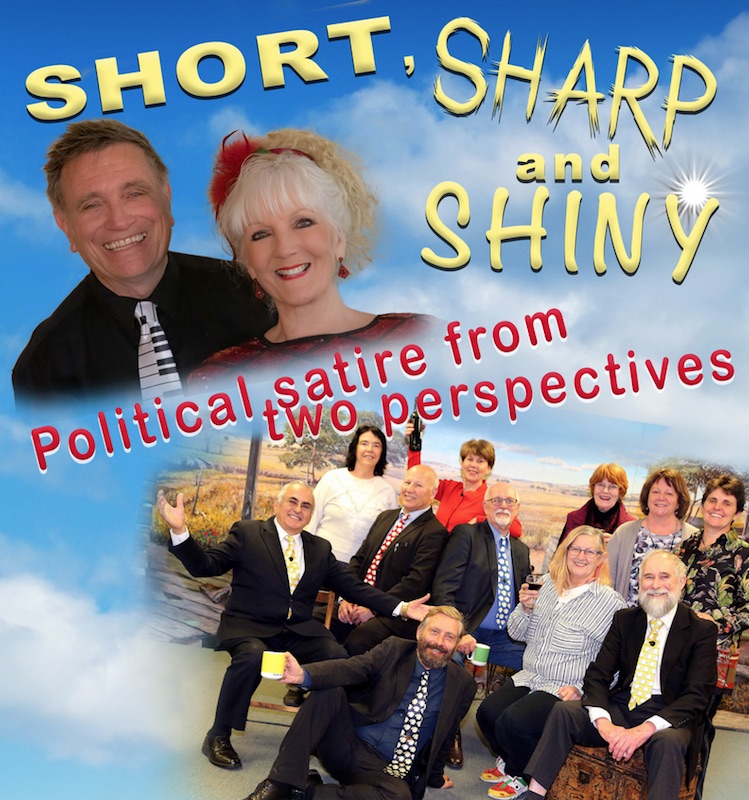 Your only chance to see this show in Sydney!

This is the first appearance of Shortis & Simpson @ The Dog, but The Bums are back in Sydney for their (almost) annual junket & will also present their normal(?) show where the pomposity of pollies is punctured, and the secrets of the Public Service are exposed.

Our end-of-year satire this time is with our old friends The Shiny Bum Singers, a brilliant political satire group made up of public servants who satirise the Public Service as well as politics. They are the shiny of our title, we’re the short, and the satire is sharp.
There’s plenty to sing about as we bid farewell to ScoMo and hello to Albo. Between secret portfolios, tax cuts, a ‘bread and butter’ budget, Barilaro’s New York venture, the Teals, climate, integrity, submarines, and Dutton. Not to mention Optus, Putin, Truss, Her Majesty, the Republic, the Voice, and much more.
The show is being performed three times only- twice in Canberra, once in Sydney.

Shortis & Simpson
John Shortis is a musician, songwriter, scriptwriter and researcher, with a passion for all things political and historical. Moya Simpson is a singer, choir leader, and comedian who uses her considerable voice range and comic flair to bring Shortis’ songs and scripts to life.  Together, they specialise in shows that reflect Australian history and politics in a way that is funny, poignant, satirical and informative.

The Shiny Bum Singers are a Canberra based singing group who entertain audiences with witty parodies and cheeky satires of politics, public service and everyday life.  They recycle well-known songs in many genres, applying fresh lyrics to tell new stories, and encourage the audience to singalong to projected words.  They have been performing since 1999 at festivals, functions and fundraisers, and more recently have been writing and performing their own musicals to packed venues.  One of their career highlights was a short tour of the UK in 2007.