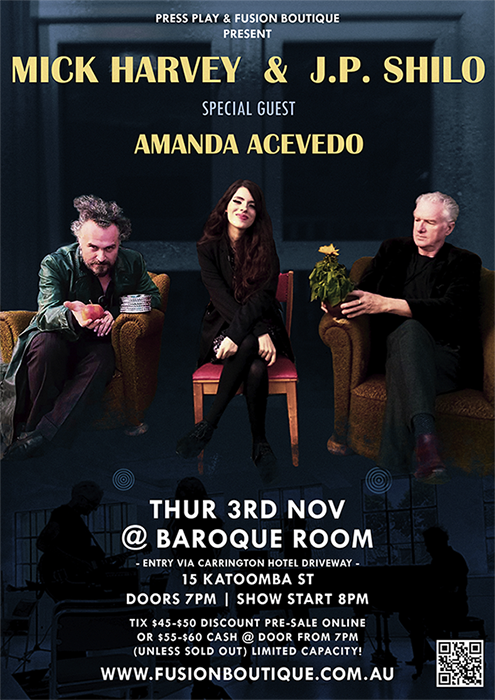 Mick Harvey and J.P. Shilo will present their joint show which was last delivered on an extensive tour of Europe in late 2019. Plans to take the show around Australia were knocked on the head by the pandemic and now, more than 3 years later, they are back to present a joint show of J.P. Shilo’s ‘Invisible You’ with Mick Harvey presenting predominantly new songs from 2 albums which are in production. One of these albums is a duets project featuring Mexican singer Amanda Acevedo, who will be joining Harvey and Shilo for a large chunk of the former’s set, augmented by a string quartet and small band.

Mick Harvey is best known as a founding member of The Boys Next Door, The Birthday Party and Nick Cave & the Bad Seeds as well as being a long- time collaborator to both Nick Cave & PJ Harvey.

He has released more than 10 solo albums under his own name including the four volume series of Serge Gainsbourg translated recordings, as well as a selection of soundtracks for film and television. He has produced a number of acclaimed albums by other artists and consequently been the recipient of several Australian industry awards including AFI Best Original Score for ‘Suburban Mayhem’ in 2006 and in 2011 took out British Producer of the Year for his (co)production on PJ Harvey’s ‘Let England Shake’.

This will be a special night of masterful music not to be missed and tickets are limited for this one show only!