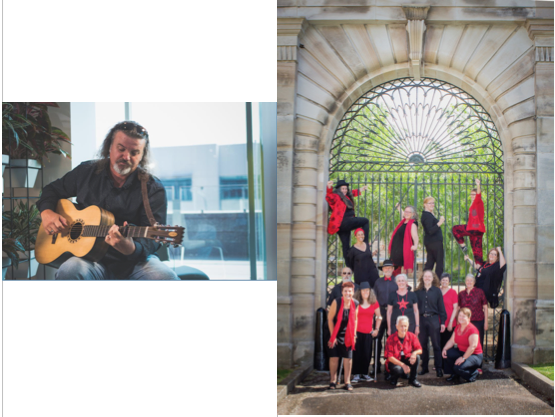 One hour each from

A songwriter with a difference; quirky wordsmith, Derek Dowding has almost always included a political perspective within his work.

Possessing an acute wit and a keen eye for the absurd or unjust, his knack as an outspoken and observant song writer has landed him several awards recognising his penchant for political satire, in particular.

As well as his lyrical pursuits, Derek is also known in the Newcastle area for his roles in large-scale theatrical productions. Noted roles including: Che in “Evita”, Abelard in “Abelard and Heloise”, Roo in “Summer of the Seventeenth Doll” and Jean Val Jean in “Les Miserables”

Derek’s debut album “Home Brew” includes many songs referencing environmental concerns. More recently he has been working with a Composer, Ross Fiddes, on a song cycle “TOASTING MOTHER EARTH”; a collaboration that offers a reflective account of the Human journey that has led to the current world predicament.

The work is particularly powerful viewed against the current backdrop: where governments extol the science guiding their response to a global pandemic, while the science around anthropogenic climate change is given contrastingly less urgent attention and is even denied by many.

SOLIDARITY CHOIR – Sometimes cheeky, sometimes earnest, always musical, always passionate! Specialising in songs about people’s struggles for freedom and social justice, this bunch of activist singers are often seen at rallies and protests. Don’t miss the chance to hear some of their gems that you won’t hear on the street. They’ll be poking fun at power, paying homage to those who lived and died fighting for a better world, and celebrating songs from around the world – the songs of the people.