Margaret Bradford’s latest project is an important CD, produced in collaboration with musicians, Gwyn Cleeves, Ian Knight, Sonya Bradford and Marcus Holden.   The CD is fittingly called HOYA- inspirational women, after the perennial green vine which Margaret inherited from her grandmother. Like the Hoya plant, women’s stories grow and survive, we endure, and our struggles and responses intertwine and recur in each generation.

This CD is a contemporary reimagining of the stories of eight pioneer Australian women, both Aboriginal and settler, their strengths, their pain and their achievements.  Some of these women are pioneers for women’s suffrage, for creating networks of care and support. For some the achievement is to gain freedom from subservience.

The Hoya sound is enhanced by the delicate backing of arrangements interpreted by excellent musicians.  The variety of instruments and alluring three part harmonies create an enhancing river of sound under the songs.  Margaret on lead vocals and bowed psaltery, Ian Knight on mandolin, Gwyn Cleeves on guitar, Sonya Bradford keyboard and vocals  and Marcus Holden on dobro, violin and cello. 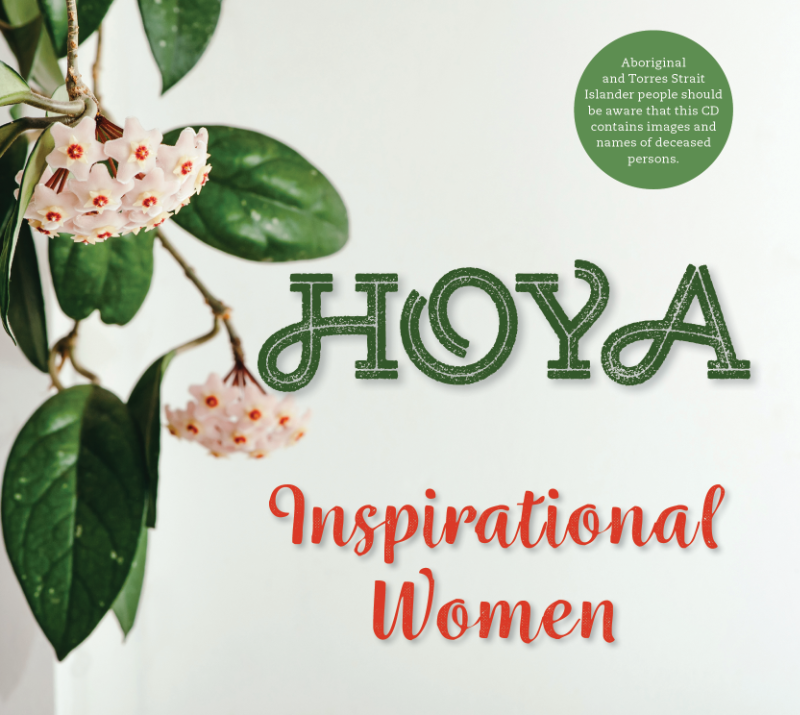 This variety of  instruments create intricate tendrils of sound and meaning. The multi-layered sound is both an honouring and a remembering of our women and their experiences.

Margaret’s voice is wise, melodic and mellow, and adds layers of warmth, character and meaning to the songs she sings. Margaret’s voice echoes the authenticity and strength of working Australian women. It’s interesting to hear Sonya Bradford’s beautiful voice both as solo and in harmony. The vocal differences between mother and daughter add light and shade. While Margaret’s rich voice echoes our Australian heart, Sonya’s voice has a flowing, understated gentleness, taking us from the past into our present.

Some of the women sung about are unknown, or have faded from general awareness.  This CD is a women’s history, honouring some of our women who have achieved locally, nationally, and internationally. The songs are beautifully arranged and supported by layers of vocal harmony and stimulating instrumental underlay.  Margaret acknowledges the contribution of the musicians who, with Margaret, have created a soulful and powerful CD.

As well as Margaret’s original songs, there are also songs by Pip James, Judy Small and Sue Gee. Sue told me that Margaret’s version of her song “I am a New Woman” is the best she’d heard.

Margaret is a respected and loved songwriter who has been integral to the folk music scene in NSW. Her contribution as a folk songwriter is as valuable as the achievements of the women she sings about.  This CD is an important part of our collective folk repertoire. It’s evocative and memorable songs will be enjoyed by musicians, by teachers, and by all lovers of our folk history.