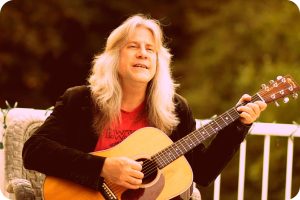 For those unfamiliar with George, he is a former union organizer and activist based in Ithaca, New York, George sings songs from the last century of labour and social struggles, and his own songs are powerful and funny takes on the state of the nation. His concerts are part sing-along, part history lesson, and he can make you shout for joy, send chills down your spine or bring tears to your eyes in the same set.

While maintaining a touring and performance schedule of some more than 200 gigs each year, George has recently turned his eyes toward the nation’s veterans and the effects of two long wars on soldiers and their families. In 2016, George released a compilation CD of songs focusing on posttraumatic stress disorder and the cost of war to our military families, “Until You Come Home: Songs to Heal the Wounds of War,” which features songs by artists including Utah Phillips and Ani DiFranco, Magpie, Roy Zimmerman, Joe Crookston, David Rovics, and John Gorka. See www.untilyoucomehome.com

George has a keen interest in labour and social history, and in 2013, George produced “The Almanac Trail,” a CD that celebrates the music of The Almanac Singers and featured Pete Seeger narrating. He toured Australia, California and the Northwest twice in 2015, including 31 concerts on the Joe Hill 100 Roadshow tours, and released his last CD, “For the Road and The Sky,” in October 2016. A new CD, “One At A Time,” is being released in September 2018.

About Max Gregory 2 Articles
I am a multi-Instrumentalist playing banjo, mandolin guitar, slide guitar, blues harp and ukulele I have been performing since the late 1960. I helped start up the NSW University Folk club in about 1967 and performed with a variety of people at everything from bush dances and balls, to folk clubs and political protests. Strawberry Jam started in about 1968 and after years of playing folk clubs went on to play clubs and the occasional television spot. We played anything that we liked from traditional Australian, Irish, British and American to contemporary music. Whistling Goose started in the late 70’s playing jugband music in Folk Clubs, wine bars and pubs up until the mid 80’s In 2005-2015 some of us got back together to form The Blue Goose Band, which played a mix of jugband, blues, jazz standards, folk and contemporary Australian songs.