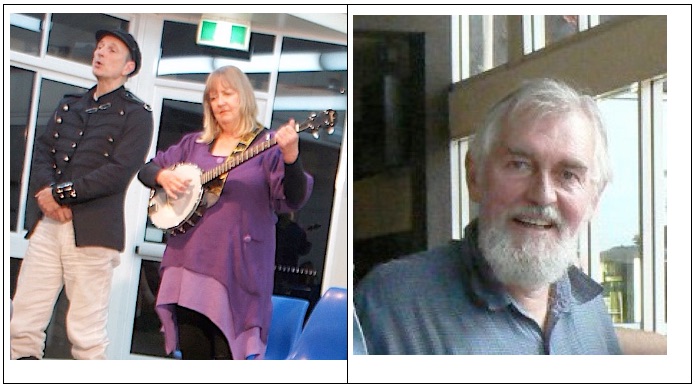 Seamus has a song for all occasions & has been performing in folk clubs and at festivals for more years than he cares to remember. He sings a variety of Irish, English, Scottish, Australian and South American songs, and has even been known to sing Beatles’ songs in Irish. He shared a house with Declan Affley in Sydney during the 1970s, sharing his enthusiasm for Australian political songs and sometimes performing with him. He was co-writer with Denis Kevans of Across the Western Suburbs in 1973.

Avid festival-goers, folk-clubbers, session singers, blackboardists and buskers Miguel Heatwole and Dallas de Brabander, as MaD aDaM, have crafted a strong and varied repertoire of traditional and modern folk duets and original songs with a twist, both a cappella and accompanied. Traditional themes of doom, death and destruction are interwoven with songs of hope, hilarity and outright silliness. Rich and inventive harmonies with voices that go hand in glove are supported by guitar, banjo, ukulele and other assorted musical noise-makers.