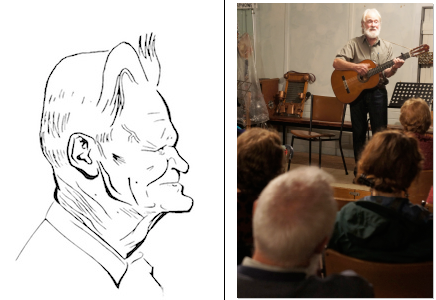 Garry is returning to Dukes, after an absence of 5 years!
Garry Tooth sings “Foggy Dew” at Bowral Folk, Blues and Beyond 2008

I was born in Central Queensland and later moved to Brisbane. I started singing old bush ballads in the late 1950s and helped form the Moreton Bay Bushwackers. In 1960 three of us formed The Wayfarers and were employed at the Primitif Coffee Lounge. In 1964 we were involved in setting up the Brisbane Folk Centre. From 1970 I was working as a singer in various restaurants around Sydney. From 2000 until 2006 I sang at my own cafe The Whistlestop at Thirlmere. I have a passion for the story in the song and have developed a repertoire of Australian, Irish, English and Scottish folk songs.

Tritton Hall, Hut 44 Addison Road Centre, 142 Addison Rd, Marrickville
Door opens 7.30 for 8pm start. Session 10.00-11.30pm
BYO songs
Cost – $10
Bring something to drink & a plate for supper
Enquiries – Sandra 9358 4886
Duke’s place, named after our honoured early member Harold ‘Duke’ Tritton (1886-1965), is the place to go once a month for a great night of Australian songs in concert and session. Duke was a powerful singer who supplied BMC with many songs he had learnt in his younger days while working as a shearer and at other bush jobs. He was also a songwriter and poet giving us songs that have entered the tradition such as Sandy Hollow Line and Shearing in the Bar.
+ Google Calendar+ iCal Export