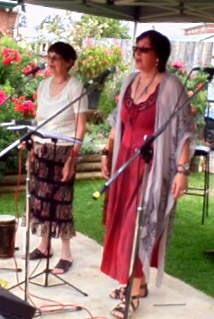 Kath Morgan, born in Colchester, came out to Australia by ship with her family when she was 10 years old. There was always music in the home, and Kath began her life-time passion of recorder playing at age six.

As a youngster, life in the antipodes was spent in Melbourne, where Kath came into contact in the late 70s with the music of Alan Stivell whose album Renaissance of the Celtic Harp made a huge impact upon her.

At Art College Kath developed a great fondness for art and drama, and her beloved recorder was always at hand. She spent around ten years in rock band circles in Sydney and moved to Dubbo 30 years ago.

Di Clifford grew up on a farm at Eugowra (Ben Hall country) and also heard music from a young age. She still fondly recalls the sweet tones of The Weavers on the wireless from around 1952!

At Bathurst Teachers College she enjoyed the wonderful music education through Choir experiences and has established school choirs wherever she taught in central western NSW.
Kath and Di met at Dubbo Folk Club in 1991 and soon realised that singing together, and with others, was very rewarding and loads of fun. Five vocalists formed the a’capella  group known as Red Dust Rising which entertained local causes around Dubbo, followed by the creation of Virago, a trio with Jane Harding in 2005. Jane later moved to Victoria so the duo now carries on in Dubbo with its distinctive Celtic/modern/comedic influences being mainly a’capella, but with some instruments incorporated where appropriate.
Virago has entertained people at concerts, weddings and community events locally, as well as blackboard concerts at festivals near and far.

A Virago tour of central western NSW in 2005 was well received, and Virago also was the Artist in Residence act at the inaugural Moorambilla Festival in 2006.

Other performances include special work at Sing Cockatoo in 2010, and delivering Sing Dubbo in 2012, with Christina Mimmocchi

The recording of its eponymous album has been the main project for 2019. This has seen an official album Launch planned for Dubbo on November 3rd, morphing into a folk music concert, with the support of musical mates from Dubbo and Orange.

Virago continues to add ideas, material and different activities to its routine, and delights in feeling supported by loyal musical friends around NSW and beyond.
~~~~~~~~~~~~~~~~~~~~
Aims of the Bush Music Club, as given in the Editorial in Singabout 1(1) January 1956 –  to popularise Australian folk song and to encourage the composition of a new kind of song – one that is traditional in style but contemporary in theme.

Map of Addison Road Centre   https://addiroad.org.au/visit-us/  Park in the carpark and follow the path on the right side of the big hall – the Hut is across the grass, decorated with dancers & musicians.
+ Google Calendar+ iCal Export