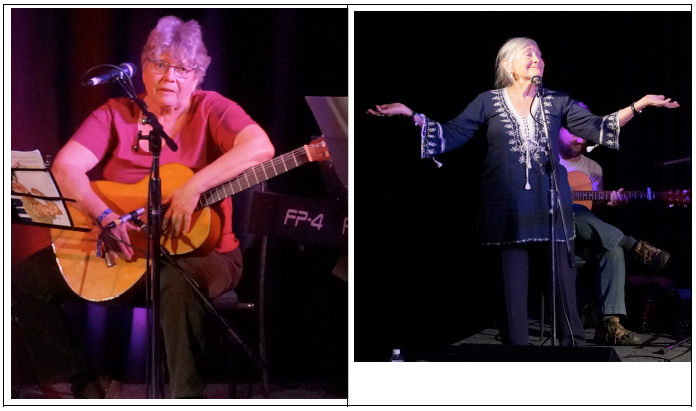 These two performers will make you laugh, cry and sing along in choruses and throw in a couple of John Dengate classics to keep you in tune …

Kerith had been writing songs since the 60s and been involved with women’s songs &and music since the 70s. She was  an organiser of the National Women’s Music Festivals in Lismore from the 80s.

from Kerith – In 1989 the Australia Council funded me to compile the First Australian Women’s Song Book. The hard copy manuscript consists of lyrics, sheet music, a resume and photograph of each writer of fifty songs collected from all over Australia. This material, carried intact to five different cities over thirty years, remains unpublished. In 2017 I finally acquired the equipment, software, time and space to transform the project into digital format.

A friend in Lismore shared the National Women’s Library’s Facebook collection of feminist posters with me in 2017 and, seeking a feminist context for my work, I contacted the Library. Luckily, Lynne Morton was aware of volunteer Dale Dengate’s interest in women’s music and reintroduced us. Due to this happy catalyst the project has come alive. For now, I’m working on a digital record of the original cassette tapes and manuscript. Once a fortnight, I come in to the Library and spend a day documenting the material according to archival practice.
Dale and I have been sharing stories of the Australian folk and women’s music scene since our first fleeting contact 30 years ago.
Once the original songbook is documented the project may expand into a more comprehensive and accessible digital archive.

from Dale – As a keen bush walker in the early 1960s, I found the Bush Music Club’s Singabout Songsters in Youth Hostels and met a couple of Club members. They invited me along to their meetings which were held on Tuesday evenings near Wynyard station. The format was similar to Methodist fellowship meetings where you sat around and sang songs. A welcome difference was that at the BMC meetings, we had portraits of well-known Australian writers, such as Henry Lawson and Mary Gilmore, looking down on us as we sang, danced or played.

Bush Music Club
Tritton Hall, Hut 44
Addison Road Centre
142 Addison Road, Marrickville
Park in the carpark and follow the path on the right side of the big hall – the Hut is across the grass, decorated with dancers & musicians.
Map here https://addiroad.org.au/visit-us/  The 428 bus stops right outside the Centre.
Aims of the Bush Music Club, as given in the Editorial in Singabout 1(1) 1956 – to popularise Australian folk song and to encourage the composition of a new kind of song – one that is traditional in style but contemporary in theme.

$10, BYOG and a contribution for supper
Duke’s Place, named after our honoured early member Harold ‘Duke’ Tritton (1886-1965), is the place to go once a month for a great night of Australian songs in concert and session. Duke was a powerful singer who supplied BMC with many songs he had learnt in his younger days while working as a shearer and at other bush jobs. He was also a songwriter and poet giving us songs that have entered the tradition such as Sandy Hollow Line and Shearing in the Bar.