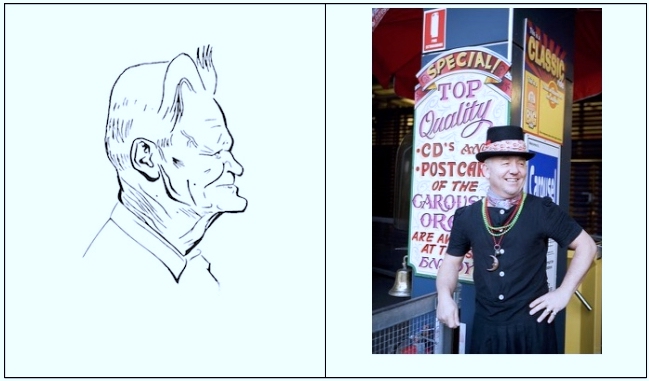 usually 2nd Fridays, 7.30 for 8pm start – concert is followed by a session $10, bring a contribution for supper

The role of the solo performer as storyteller.

‘Broadsides’ were the newspapers of the day. New technologies, throughout history, have had a profound effect on the content and mass distribution of songs. In this case 16th century printing technology provided the vehicle to popularise 100’s of thousands of stories around Britain.

Contemporary stories, gossip and scandal were written up in verse on broadside paper sheets and sold, mainly in urban areas. Often individuals would attempt to solicit extra money by singing the songs as he or she sold them.
The Pump is part of the Broadside tradition, and writes and interprets songs, often using contemporary technology to accompany himself.

Ian ‘the Pump’ Macintosh was a performer and songwriter with the popular Wheeze & Suck Band.

A regular performer at clubs and festivals in Australia, New Zealand and the UK, Ian has also won the Australian Songwriters award (2009 – Rag and Bone), and has been a finalist in two MusicOz songwriting competitions.
Since the Wheeze & Suck Band ceased regular performances in late 2016, Ian has been performing his interpretation of traditional and original solo material as ‘The Pump’, as well as organising ‘The Pumps’ to perform in a band situation.
The Pump has released six albums with the Wheeze & Suck Band, and has two Pump solo albums available at gigs and online. The most recent Pump album is Waterside, recorded with Marcus Holden and The Shack’s Rhonda Mawer.

Check out the Pump on www.wheezeandsuck.com, or www.facebook.com/pumppage, and https://thepump.bandcamp.com/ for free downloads and albums.