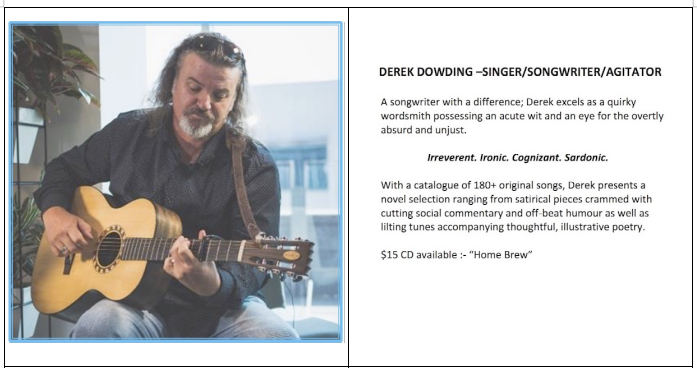 A songwriter with a difference; Derek excels as a quirky wordsmith possessing an acute wit and an eye for the overtly absurd and unjust.

Aims of the Bush Music Club, as given in the Editorial in Singabout 1(1) 1956 –  to popularise Australian folk song and to encourage the composition of a new kind of song – one that is traditional in style but contemporary in theme.

$10, BYOG and a contribution for supper

Map of Addison Road Centre   https://addiroad.org.au/visit-us/  Park in the carpark and follow the path on the right side of the big hall – the Hut is across the grass, decorated with dancers & musicians.


Duke’s Place, named after our honoured early member Harold ‘Duke’ Tritton (1886-1965), is the place to go once a month for a great night of Australian songs in concert and session. Duke was a powerful singer who supplied BMC with many songs he had learnt in his younger days while working as a shearer and at other bush jobs. He was also a songwriter and poet giving us songs that have entered the tradition such as Sandy Hollow Line and Shearing in the Bar.