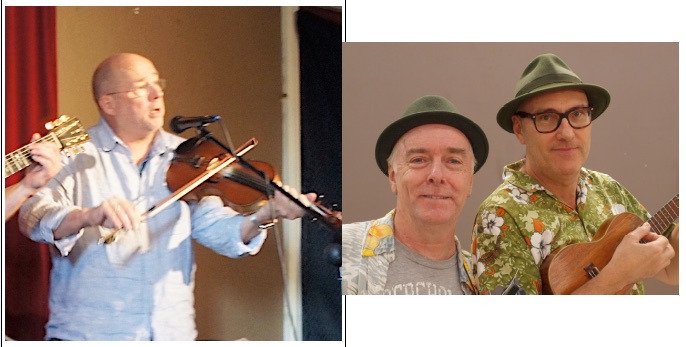 Doug Jenner is a fiddle singer from Sydney, now resident in the UK.
Doug’s musical career started with bush bands in the 1980s – Australian Heritage in Wagga, Shearer’s Dream and Ned’s Revenge in Sydney. A regular at Sydney sessions, Doug was a judge at the Australian Bush Band championships in Glen Innes and he worked on Chris Kempster’s The Songs of Henry Lawson which was presented at folk festivals and recorded as part of the ABC’s Songs and Stories of Australia series. With John Dengate Doug recorded music for The Story of Eliza Donnithorne as part of that same series, and co-wrote and presented a Henry Lawson/Banjo Paterson workshop presentation.
In the 1990s, Doug performed with Sydney Irish bands Emigrants, Irish Drovers, Gingermen, Cean Eile and Claddagh.
In the UK, Doug  has developed and is currently presenting Voice of a New Nation with Martyn Wyndham-Read – a reworked version of Kempster’s original Lawson show. He also organises regular folk sessions and in 2016 he and some friends started Kimpton Folk Festival, now in its 4th year.

Since teaming up as a busking duo in 2008, Aubrey & Purton have spent thousands of hours performing at some of Sydney’s best known community events, including Paddington, The Rocks and Eveleigh Markets, as well as numerous pubs, clubs, parties and weddings.

Aubrey & Purton have developed a vast repertoire of songs, spanning classic pop from the 1920s to the 1980s, selected hits from recent years and original compositions. Pop from the 50s and 60s is a speciality – like Elvis, Everly Brothers, Beatles, Stones, Dylan and those countless one-hit wonders.

Dennis Aubrey (guitar, ukulele) is an accomplished songwriter and a highly experienced street singer, with the knack of engaging his audience. His easy-going spontaneity makes each appearance anything but predictable.

Pete Purton (ukulele) has a broad knowledge of popular song. He developed an interest in the ukulele while honeymooning in the South Pacific. Pete plays a Cole Clark ‘Jack Tenor’ ukulele.