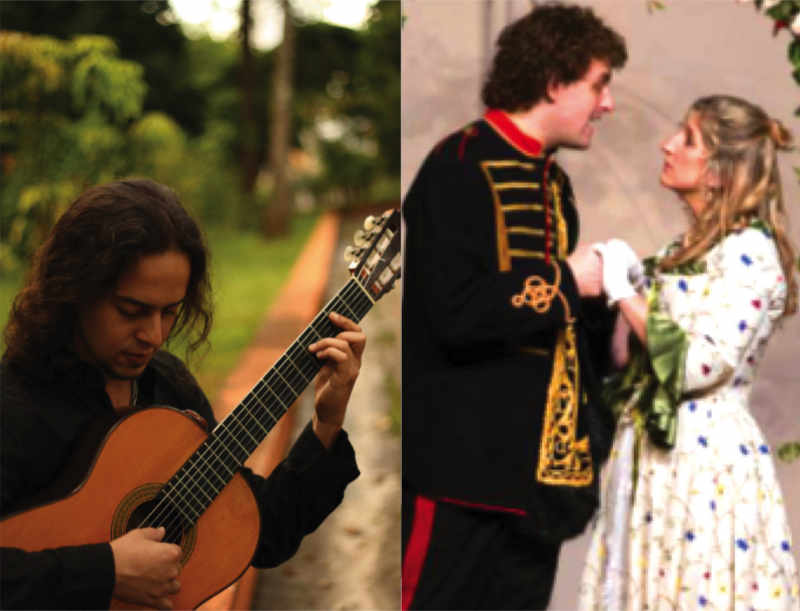 Chrystian Dozza is one of the leading lights of the new generation of Brazilian instrumental musicians, a brilliant young guitarist/composer whose talents have been widely displayed and rewarded.

He has three recorded CDs: Songs from the Land (2006), Fantasia Mineira (2010) and Despertar (2014), made up of his original compositions and creative arrangements of Brazilian classics.

Dozza has won many important contests, such as the Concurso Nacional de Violões Musicalis, Concurso Novos Talentos da Música Erudita and the Concurso Violão sem Fronteiras that cover all kind of guitar music, and are awarded at the renowned Festival Assad. He also won the prize for best instrumentalist of the XIV Prêmio BDMG Instrumental, one of the most important awards within the Brazilian instrumental music community, and was among the winners of the composition contest Concurso de Composição para Violão Solo – Novas #2.

Lisa Stewart (Soprano) and Michael Handy (Tenor) met in 2014 when they were cast as lovers Elsie and Fairfax in The Yeomen of the Guard. In addition to both working full-time in marketing, they have continued to perform together in various shows, concerts, and with two a cappella choirs ever since, and have ended up taking their on-stage chemistry to the stage of real life!

Together they will delight you with solos and duets from opera, operetta, and music theatre…with a smattering of folk to provide a taste of what will be on offer in Reedy River this July in Narrabeen!