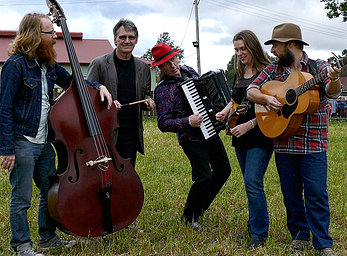 Chloe & Jason Roweth Band present…
‘The Soul of A Poet: The Songs and Poetry of Henry Lawson’

The power and pathos in Henry Lawson’s writing still resonates strongly today. 151 Years after his birth, the Roweths invite you to join them in savouring this extraordinary man’s work. Some poems have been set to music by the Roweths and Chris Kempster amongst others, some are recited with the dynamic musical accompaniment the Roweths have pioneered in recent years. The presentation also makes rich use of the dance music of Henry’s first home, and the Roweths’ home – Central West NSW. With full band accompaniment these pieces can soar, whisper, brood and swing. A toast to you Mr Lawson – creative artist, flawed genius, revolutionary and humanist.

Salleh & Strazz – Gorgeous songs from Brazil & beyond
Singer/guitarist Anna Salleh (pronounced ‘Sah-lay’) is one of Australia’s much-loved exponents of Brazilian jazz and other crossover music styles. Anna cut her teeth performing in acappella groups, small ensembles, and as a musician for improvised theatre. She has performed in clubs and festivals around the country, and internationally, from Kuala Lumpur to Edinburgh.

In 2010, she rediscovered the beauty of Brazilian music that first captured her imagination as a child. She packed up her guitar and spent three months in Rio de Janeiro, performing with, and learning from, local musicians – including bossa nova elders like Roberto Menescal and Mauricio Einhorn. She also deepened her understanding of classical Brazilian music styles, exploring the roots of bossa and learning about samba and choro (originally an instrumental form of music that preceded samba). Her journey of musical discovery in Brazil led to the development of a touring show, an ABC radio documentary and two albums.

Guy Strazz is an acknowledged master guitarist and composer specialising in modern jazz and Brazilian music such as choro and samba. He has performed at international music and arts festivals including Jak Jazz, Jazz Yatra, Johannesburg Film Festival, Perth and Adelaide Arts Festivals, Melbourne and Wangaratta Jazz, Japan World Expo, and Clusone Jazz in Italy. He is the recipient of several album nominations and awards including the prestigious Australia Council for the Arts Music Fellowship; two APRA Nominations and a Jazz APRA Award.

“Strazz takes to the classical guitar and the virtuosity is dazzling” – The Age.
“Unaffected, warm-hearted” – Sydney Morning Herald.
“An outstanding artist” – Jazz Scene.